The client, a 350 year old company headquartered in France, has had a presence in India since 1996 and manufactures solar control, fire resistant and other various types of glass. The client has achieved strong and profitable growth since then, and today, is a leader in all its major businesses, with 25 manufacturing sites and about 6,500 employees in India.

The client required a demineralized water system for its boiler application (steam production) in its manufacturing facility in Gujarat. The water source is Gujarat Industrial Development Corporation (GIDC) water. The water treatment configuration selected was clarification, settling filtration, reverse osmosis and final polisher. The client had two choices for the final polishing unit after reverse osmosis, either a mixed bed polisher or an electrodeionization (EDI) unit, they chose EDI because of various advantages offered by the technology.

The key design element of the client’s water treatment plant was an EDI system which can withstand feed hardness of 3 ppm as CaCO3. Conventional EDI technologies are designed to operate with water with a hardness of up to 1.0 ppm as CaCO3, to prevent scaling inside the unit.

Since the client’s plant was designed with a single-pass RO, the hardness in the RO permeate was expected to be in the range of 3ppm. Careful selection of the EDI technology was required to ensure that the system would not require frequent chemical cleaning on account of hardness scaling and would operate without interruption.

After detailed technical and commercial evaluation, QUA’s FEDI 1 30X model, which has hardness tolerance of up to 3ppm as CaCO3, was selected for the electrodeionization polishing process. The FEDI 1 model thus provided the OEM and the client with a solution for the high feed hardness, which will operate with single-pass RO permeate, without having to invest in a second pass RO. It enabled the client to save on the cost of a second pass RO, which they would have incurred with any another EDI system.

Electrodeionization is a continuous, chemical-free process that removes ionized and ionizable impurities from the feed water using DC power. EDI is most commonly used to treat reverse osmosis permeate and replaces Mixed Bed (MB) ion exchange; producing high purity water of up to 18 M Ω/cm. EDI eliminates the need to store and handle hazardous chemicals required for MB ion exchange resin regeneration and associated waste neutralization steps. EDI has a much lower space requirement, a low operating cost, and a quick return on investment in comparison to mixed bed; and produces high grade product water quality up to 18 M Ω/cm on a continuous and consistent basis.

Choosing an EDI system which will operate with single-pass RO feed water with less maintenance results in significant capital, space, and O&M savings that makes the solution effective and reliable.

After detailed evaluation of various EDI options, the customer found QUA® Fractional Electrodeionization (FEDI®) to be the only technology which could withstand hardness of 3 ppm as CaCO3 in the feed.

FEDI is an advancement in EDI technology which was developed to address the limitations of conventional EDI. FEDI’s patented dual voltage process allows for a higher flexibility and tolerance to inlet water conditions, thus lowering the risk of scaling, and improving the plant’s design economics and reliability.

FEDI’s patented design maintains an acidic condition, thus reducing the scaling potential in the first stage and basic condition which helps in efficient removal of silica in the second stage of the EDI concentrate compartment.

QUA supplied 4 FEDI stacks, which were commissioned in September 2017. The FEDI system is designed to polish 12m3/hr of RO permeate with final product water conductivity of less than 0.5 microS/cm which is further used as boiler feed. The FEDI system has been in continuous operation since commissioning, and is delivering consistently superior product water quality with low conductivity. These EDI units have not required any chemical cleaning during last two years of operation. 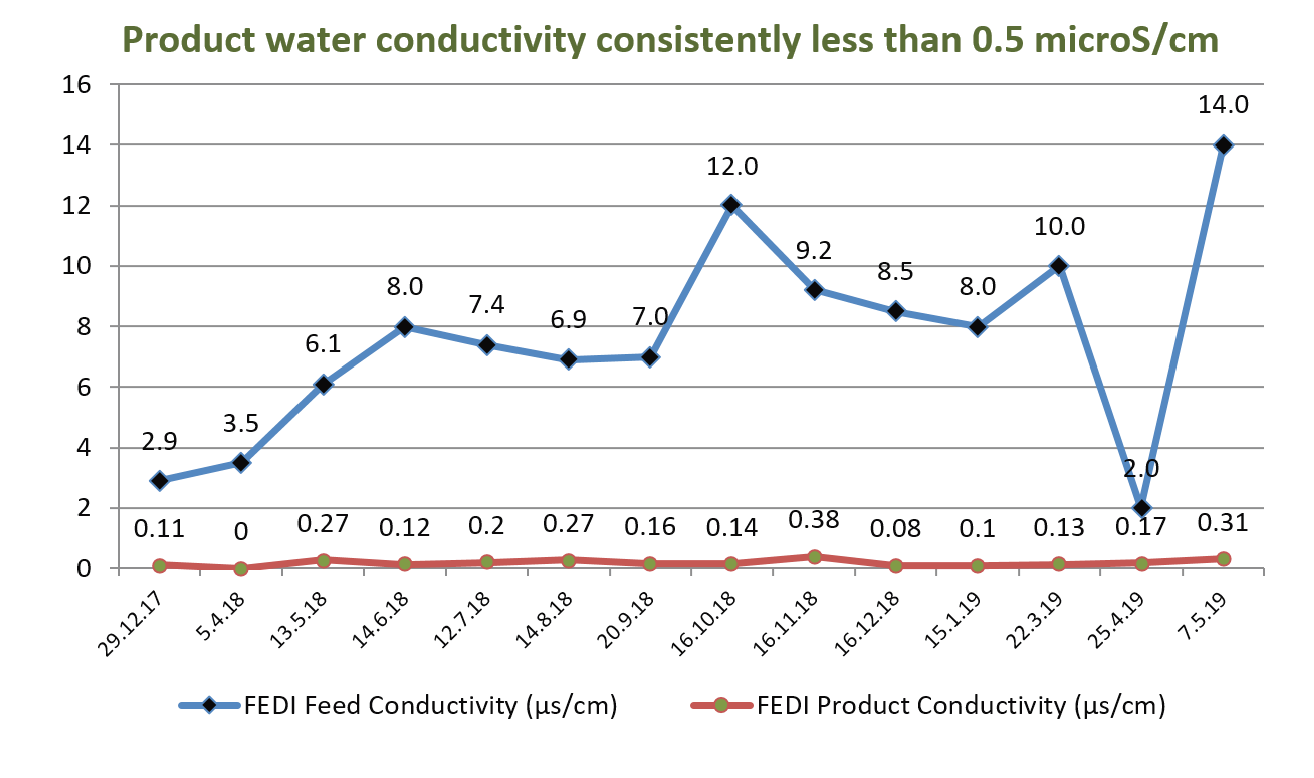