The Electrodeionization (EDI) process, invented over 20 years ago, is a continuous, chemical-free method that removes ionized and ionizable impurities from the feed water. EDI is most commonly used to treat Reverse Osmosis (RO); permeate and replace Mixed Bed (MB) ion exchange; producing high purity water of up to 18 M Ω.cm. EDI eliminates the need to store and handle hazardous chemicals required for resin regeneration and the associated neutralization steps.

QUA’s Fractional Electrodeionization (FEDI) process is an advancement of EDI and was developed by taking into account the limitations of conventional EDI. FEDI has been in the market for over five years now and has been installed in power stations, refineries, and more. Many of these FEDI systems supplied are some of the largest installed systems in the world.

The patented dual voltage process allows for a higher flexibility and tolerance to inlet water conditions, thus lowering the risk of scaling, and improving the plant’s design economics and reliability. FEDI products are supported with CE conformity certificates.

Making a good technology even better

Hardness is the scaling component and the main limiting factor for feed conditions in a conventional EDI. By incorporating a two-stage separation process with different voltages the FEDI process is able to: 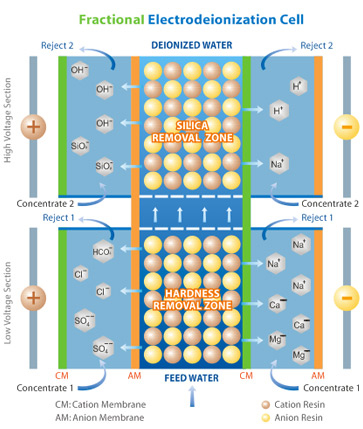